With approximately 150,000 newly diagnosed cases of psoriasis each year, this chronic skin disease affects approximately 2% of the US population and causes considerable morbidity.(1) First-stage treatment of patients with moderate- to-severe psoriasis often starts with topical agents and then progresses to phototherapy (UVB) for more extensive disease. Extensive disease that cannot be controlled adequately with UVB treatment is then treated with second-stage agents such as psoralen plus UVA (PUVA), methotrexate, cyclosporine, or other oral medications.(2) In the past, PUVA and oral agents such as methotrexate have been viewed as effective outpatient treatments.(3) However, concerns regarding PUVA- induced cutaneous carcinoma and melanoma have restricted its use.

Furthermore, long-term treatment with oral agents such as methotrexate have a number of systemic toxic effects. As a result, recent efforts to treat psoriasis have become geared toward a particular type of phototherapy known as narrowband UVB (Philips TL-01).

Phototherapy treatment for psoriasis has been extensively modified since the landmark combination of UVB and topical tar emollient was introduced by Goeckerman in 1925.(4) Despite changes in delivery sources, treatment schedules, and dosing regimens, as well as the use of different emollients, traditional broadband phototherapy has remained a modality that necessitates a day clinic or hospital setting. An advance in UVB-based phototherapy was the introduction of fluorescent lightbulbs (TL-01) that deliver monochromatic light at 311-nm UVB, a narrowband wavelength that seems to maximize clearing of plaques relative to its erythrogenic potential.(3)

The rationale for this UVB source stems from a study by Parrish and Jaenicke (5) that determined that UV wavelengths longer than 313 nm were not as effective in resolving psoriasis, whereas wavelengths shorter than 300 nm only produced UV burns without clearing psoriasis. Further analysis of wavelengths from 300 to 313 nm established the best therapeutic index at 313 nm, which is now referred to as the lowest fraction of minimal erythema dose required to remit psoriatic skin lesions.(6) Overall, multiple studies have shown the effectiveness of narrowband UVB treatment to be superior to that of conventional broadband UVB treatment.(3,7)

This effectiveness has been shown on both a clinical and histologic basis. Coven et al(3) showed histopathologic resolution of epidermal hyperplasia, as indicated by keratin 16 expression, was achieved in 88% of lesions treated with narrowband UVB compared with 59% treated with broadband UVB; epidermal acanthosis also was reduced more completely by narrowband UVB treatment. Clinical resolution of psoriatic lesions occurred more rapidly following narrowband UVB treatment, with some patients achieving complete resolution after 2 to 3 weeks of treatment.3 Narrow- band UVB phototherapy also has been shown to be as effective as PUVA therapy in producing clinical remission of psoriasis, and clearing was produced in a shorter time period.(8)

Considerations regarding the administration of narrowband UVB phototherapy include the num- ber and frequency of treatments, as well as the dosage required. Dawe et al (9) showed that treatment 3 times a week for 40 days produced the same clearance of psoriatic plaques as treatment 5 times a week for 35 days, but with significantly fewer side effects from erythema. Another study demonstrated that narrowband UVB must be given at least twice a week to produce effective clearing.(10) The required dosage of UVB has been guided largely by dose- limited erythema. Traditionally, schedules have been aggressive. Walters et al6 showed suberythemogenic narrowband UVB is markedly more effective than conventional broadband UVB. Eleven patients were treated 3 times a week using a split-body approach for a total of 6 weeks.

The Psoriasis Area and Severity Index (PASI) was first described in 1978 as a method of quantifying the extent of psoriasis (11) and was subsequently used to assess disease severity.(12) However, when used alone, it has been criticized because of its lack of reliability. The Psoriasis Disability Index (PDI) is designed to measure a patient’s quality of life through the use of a validated questionnaire that looks at more subjective factors.(12) The efficacy of narrowband UVB was assessed in one study by quantifying disease severity using both objective (PASI) and subjective (PDI) measures.(12) In the 100 consecutive patients assessed, disease symptoms and the subjective quality-of-life measures improved significantly as indicated by a marked reduction in PASI and PDI scores at 3-month follow-up.(12) The small group of patients who continued to score high on their PDI, despite objective clinical success, further emphasizes the importance of both objective (PASI) and subjective (PDI) measures when evaluating narrowband UVB or any other treatment for psoriasis. This is because these patients may require more intensive supervision and counseling in the post treatment period.(12)

Recent studies have demonstrated the successful use of narrowband UVB in combination with other agents such as oral retinoids and methoxsalen for the treatment of psoriasis, as well as for the treatment of atopic dermatitis and polymorphic light eruption.(13) One recent multicenter study (14), evaluated the synchronous application of narrowband UVB and Dead Sea salt solution (balneophototherapy) baths in nearly 700 patients. It has been well known for decades that the climatic conditions at the Dead Sea, where sunlight and saltwater are the 2 main components, improve skin lesions for most patients with psoriasis.(15) The special antipsoriatic effect of Dead Sea salt compared with hypertonic solutions in general is caused by the salt’s high concentration of magnesium ions.(1)

This study used an anatomically shaped therapy bathtub equipped with a system for solution balneotherapy. The study used 10% Tomesa solution, which is an analogue to the ion concentration of Dead Sea water. It was combined with a light console and a reflector system that used TL-01 UVB lamps (narrowband UVB) located above the tub. All patients started with an initial therapy of 3 to 5 sessions per week for up to 35 sessions. Patients then received maintenance therapy for up to 35 additional sessions. An overall improvement of the mean PASI score was shown during the study (17.1 at baseline and 5.2 at the end of initial therapy). Most investigators (69%) and patients (79%) assessed synchronous balneophototherapy to be superior to previous treatments. In fact, 88% of patients regarded this therapy as pleas- ant and comfortable.(14) This statistic is particularly important when considering the management options for a chronic disease such as psoriasis, which necessitates multiple treatment courses throughout a patient’s lifetime.

Narrowband UVB phototherapy has considerable advantages over traditional treatment options such as broadband UVB and PUVA. It is clearly more effective than broadband UVB, safer than PUVA, and well tolerated by patients when taken at suberythemogenic doses. Although new treatment modalities such as the 308-nm excimer laser have appeared promising in small-scale studies, optimal dosing and administration methods remain to be determined. With superior ratings compared with traditional therapy and an ever-widening array of combination treatment options, narrow- band UVB has emerged in the new millennium as an established and effective treatment for psoriasis. 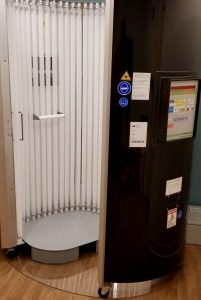